What the CDC Won’t Tell You About SV40, Polio Vaccines and Cancer

“The chief, if not the sole, cause of the monstrous increase in cancer has been vaccination” – Dr. Robert Bell, fmr VP International Society for Cancer Research at the British Cancer Hospital

The public was kept in the dark for decades about tens of millions of polio vaccines laced with SV40, and its implications for the widespread epidemic of cancer.

The relevant facts were known by the scientific community back in 1960, but it wasn’t until lawsuits and investigative reports in the 1990s and a Congressional hearing in 2003 that the public was informed about the scale of the contamination and its possible link to many of the deadly forms of cancer spreading today. Yet little has been acknowledged in public discussion since that point.

In the aftermath of these admissions and inquiries, the CDC launched a fact sheet page on its website addressing the links between “Cancer, Simian Virus 40 (SV40), and Polio Vaccine” which noted the discovery of SV40, its presence in an estimated 10-30 million doses of polio vaccine and disputed scientific claims concerning its presence in cancer tumors and its possible role in causation.

Worse, scientists in the late 1990s revealed a secondary form of SV40 that was present in post-1963 versions of the polio vaccines — after the formulations with SV40 were replaced — which were not detectable in the testing methods used up until that point — meaning that the impact of this virus on the public could be even more widespread yet largely unknown.

But as of June 2013, that CDC page has been apparently scrubbed and is no longer available, except through a cached version shown in this video. 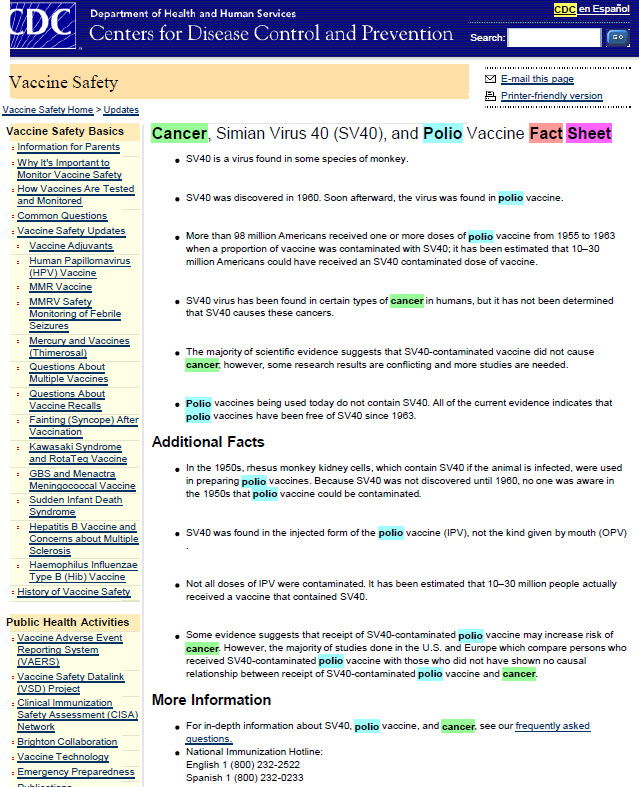 Do they expect the public to forget?

Regardless, nothing has been done to hold any of the pharmaceutical giants responsible for this monstrosity liable for their actions, and the companies continue to produce vaccines administered to Americans every single day.

Whatever master agenda could be at work here, it is amazing that the American and global public continue to trust their bodies to the same science that ‘accidentally’ contaminated tens of millions of people vaccinated for polio with a monkey virus found time and again in cancerous tumors. The presence of SV40 — which Merck vaccine scientist Maurice Hilleman joked in the video below caused tumors — has not officially been recognized by the government as having caused all these cancers (again, the CDC has continued to affirm ‘further research is needed’).

As this strain of monkey virus has consistently been found present in many types of cancerous cells in people all over the world at this point, the significance of such a correlation cannot be denied.

Why are the same industry and government players allowed to continue to play both God and doctor on your children? On your family, neighbors and fellow human beings? Why has no one been held accountable for these crimes of negligence, or worse?

Truthstream News Special Report: About All Those Vaccines…