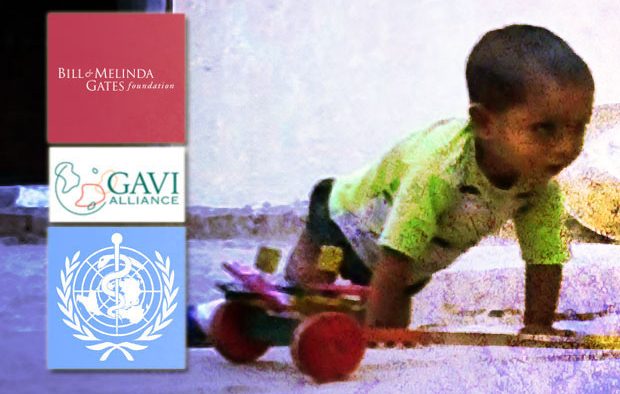 At least he certainly OUGHT to have known that oral polio vaccines were discontinued in the U.S. due to their known contribution to vaccine-derived paralysis.

The Bill and Melinda Gates Foundation created the GAVI alliance to push vaccinations on the poorest parts of the developing world in the name of “saving lives” and stopping disease.

In particular, Bill Gates expects to take credit for wiping out polio worldwide by making it one of his primary issues. But at what cost?

In April 2012, I reported on a disturbing claim in the Indian medical press that some 47,500 children had been paralyzed as a direct result of the polio vaccination campaign that had swept through their populous country. India’s National Polio Surveillance Project found that a sharp rise in the cases of non-polio paralysis correlated with areas where doses of oral polio vaccine were also increased.

Worse, children afflicted with polio vaccine-derived non-polio paralysis “were at more than twice the risk of dying than those with wild polio infection,” according to Indian officials.

Bill Gates has publicly denied that his vaccination campaign harmed anyone after being confronted by Truthstream Media’s Melissa Melton.

In June 2013, a ten-month old baby in India made headlines after the infant was paralyzed from receiving a polio vaccine, all while Bollywood celebrities, reportedly hired by the Gates Foundation, were used to urge the public to accept the vaccinations.

Perhaps the worst part of this tragic backlash in what is meant to be a campaign to improve public health is that the Bill and Melinda Gates Foundation and the UN’s World Health Organization knew that oral polio vaccines caused paralysis – but they thought the trade off was worth it. The claim rings as hollow as when former Secretary of State Madeline Albright claimed that some half a million Iraqis killed by sanctions was also “worth it.”

After years of controversy in the United States, the use of oral polio vaccine (OPV) was discontinued in 2000 due to its proven link with vaccine-derived poliovirus (VDPV), and in the UK circa 2004.

The use of an injected and inactivated polio vaccine (IPV) replaced its usage in the Western world, while oral polio vaccine continues to be used in the developing world.

Wikipedia notes that the WHO “considers the benefits of vaccination to far outweigh the risk of vaccine derived polio.” A statement on the World Health Organization addressing the issue of vaccine-derived polio updated in April 2013 claims, “The small risk of cVDPVs pales in significance to the tremendous public health benefits associated with OPV.”

While that risk may be statistically negligible from the bureaucratic point of view of the United Nations and agenda-driven philanthropy, the vaccine-derived paralysis has ruined at least 47,500 real human lives in India, in children who would have likely never contracted paralyzing polio but instead were paralyzed and permanently harmed by the so-called “cure” – all while an alternate vaccine not linked with paralysis has long been available.

Who carries the burden for those wrecked lives, and why does no one in the mainstream corporate media address this issue or attempt to hold anyone accountable? I guess there are no political points to be scored, so it won’t be appearing on your TV screen.

Why Were the Georgia Guidestones Destroyed?
Aaron & Melissa Dykes Jul 08