Concept Art: Be a Drone Pilot! 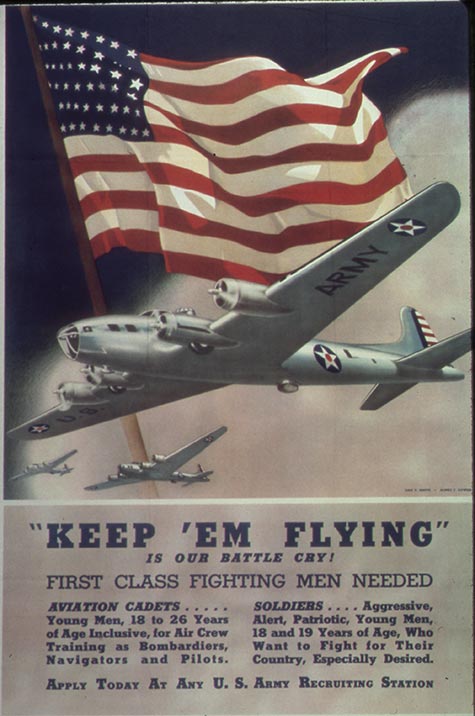 They used to be called ‘aviation cadets’. 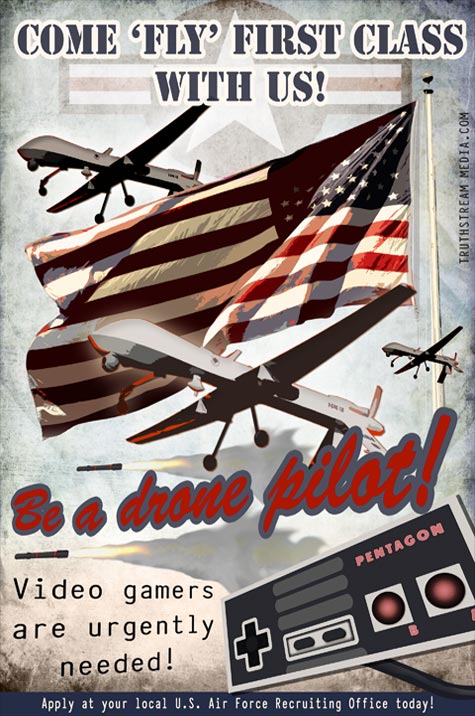 my version, updated to modern times

Here are a few facts about our nation’s drone program:

The U.S. Air Force is currently training more drone pilots than any other kind of pilot. By pilot, they mean guy who sits at a terminal in a military base and remotely controls a drone to blow people up who have not had any due process thousands of miles away in countries where war has never been declared. AP calls this shift a “cultural change“.

A first-person shooter game called America’s Army was developed by the Pentagon and U.S. Army and released for free in the summer of 2002. Game developers fully admitted it was a recruitment tool, and it cost taxpayers nearly $33 million over a period of ten years to create. The game is on its fourth version now.

In 2010, AOL ran a story about how the Air Force was developing a similar video game specifically to attract new drone pilots.

Video games are credited for turning the high school dropout featured in this story into a full-blown drone pilot instructor for the Army at the age of only 19. Once more (because it bears repeating), some teenage kid played a lot of video games and dropped out of high school, but at the age of 19, he is now considered ‘qualified’ according to our military to teach others how to fly automated death machines.

Apparently that’s all it takes.

To legitimize this program, the Pentagon keeps trying to issue a medal to our drone pilots called the “Distinguished Warfare Medal” which would have represented the largest shift in medal hierarchy since World War II and would have outranked the Purple Heart given to troops actually wounded in actual battle. The shift was reportedly supposed to represent the changing face of modern warfare (to drones).

The Pentagon finally gave up on the idea after so many veterans and families came forward to share their utter disgust.

It really seems like a bad video game. Check out the Navy’s drone department logo:

It’d be comical if it wasn’t real.

Finally, our drones kill about 50 civilians for every one supposed terrorist we strike. That’s 50 innocent people — including women and children and the elderly — murdered.

Not in a video game. In real life.