Forgotten History Lesson: America Is the Same ‘Ol Oligarchy It Was over a Century Ago

When Americans see charts like this one which illustrate that virtually all the food on grocery store shelves basically comes from no more than 10 megacorporations, or hear statements like this one from our own Attorney General Eric Holder who told the Senate Judiciary Committee that some banks are just too big to prosecute, or check out studies like this one out of Princeton which openly declare we are not a democracy but an oligarchy…it’s kinda hard to believe we aren’t an oligarchy (because we are).

Come on, even our Federal Reserve Chair Janet Yellen (you know, the lady that runs the place that prints our money and sells it to us with interest) has basically admitted it.

But are things really getting worse these days or is this just par for the course — the same course we’ve been on for over a century now?

Tinkering around in an old bookstore in a small Texas town, we came across a set of old books on democracy; we got the first seven volumes of a set entitled, “The March of Democracy: A History of the United States“

written by James Truslow Adams — the guy who coined the term “The American Dream” — for a mere $20. 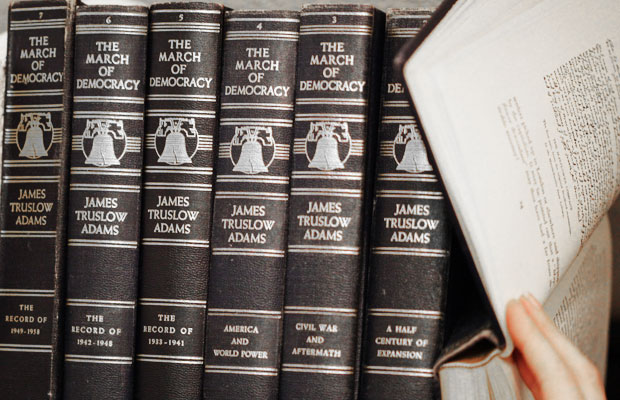 For example, in volume four “America and World Power

,” the book discusses how “Gradually and quite naturally, there grew up the belief in a great conspiracy on the part of the very rich to ruin the poor.”

Read this and tell me — does any of it sound even the least bit familiar to you?

Most strikingly in the public eye were the great Titans of the new business era, the coal and meat “barons” and the copper, railway, steel, and other “kings,” men of the type of the elder J.P. Morgan, of James J. Hill, William H. Vanderbilt, Carnegie, Frick, William H. Clark, and Rockefeller. Such men had certain broad traits in common, differ as they might from each other as individuals. They were men of wide economic but intensely narrow social vision, and of colossal driving power and iron wills. They could lay their economic plans with imperial vision in time and space, but for the effect of their acts on society they cared nothing whatever. They claimed the right to rule the economic destinies of the people in any way that would enure their own personal advantage. Illogically, they insisted upon the theory of laissez-faire for all except themselves, while they demanded and received every favor they wished in the way of special privileges from the government, as in the tariff and the silver purchase Act. The whole machinery of government must be at their disposal when desired — legislation, court decisions, and Federal troops. They combined their business units into “trusts” and combinations of almost unlimited power, yet they insisted on “freedom of contract” when dealing with labor, whose organization in any form they almost wholly refused to sanction.

They never taught you any of that back in school, did they?

That was written, by the way, in 1940; the author was discussing how America was run back in the late 1800s.

Not only is the emphasis on Democracy a distortion of the fact the nation was founded as a Constitutional Republic, where rights are preserved rather than subjected to the whims of the majority, but these passages demonstrate the familiar snow job surrounding the all-but-official banker’s oligarchy that has ruled this country and many others for some time.

Adams records the death of John D. Rockefeller, Sr., as the end of the era of this great wealth — never to occur again.

On May 23, John D. Rockefeller, Sr., died at the age of 97. Owner at one time of the largest fortune in the world, his lifespan had covered the entire history of American business from before the Civil War… Nearly $350,000,000 are handled by three of the Rockefeller Foundations for education, medical research and other uses. Whatever may be thought as to the methods of accumulating the beginnings of the fortune in a period of different business ethics and social outlook, no other man through his financial gifts has ever so widely benefited mankind. With our income and inheritance taxes no other such fortune will ever again be accumulated, and his death marked the end of an era in American history.

And so that’s the end of the story, kids…

Everything ended happily ever after.

Despite appearances, the shift on the part of the Rockefellers and other Robber Barons of the day from outright monopoly to “philanthropic” “non-profit” charity work was not an end to the dominance by the super-rich of the early 2oth Century, but an intensification of their undue influence. The taxation of the wealthy as well as the anti-trust actions of the day, which included busting up megacorpses like Standard Oil and AT&T, were perhaps well meaning but fundamentally failed to reign in the disparity of power.

Instead, new tax laws, in reality, acted to restrict new wealth from reaching the heights of the oligarchy, allowing “the elite” the keep their own, and initiate new members as desired. The tax-free status of many institutions – including the Rockefeller Foundation, the Carnegie Endowment for International Peace and the Ford Foundation – allowed the incredibly wealthy to a) shield their fortunes from taxation, b) appear to do good works and boost public opinion of their principle members while c) influencing, writing and developing official public policy through the steering mechanisms of its own tax-free grant making, think tank and research powers. Much social engineering has taken place – with far too little public notice – through these bodies. Additionally, d) many of its directors and board members were in “respectable” positions to shift into official government positions through the revolving door without appearing to be acting on behalf of their corporate masters.

The Reece Committee Hearings, conducted in 1953, attempted to probe the role of tax-free foundations in public life and uncovered many outrageous and conspiratorial actions taking place, including very apparent agendas advancing a one-world corporate-dominated government. However, it did not succeed in a general public understanding of what was taking place, nor did it reign in their powers.

Yesterday, the markets in gold, silver, oil, steel and other commodities were successfully cornered by the Rothschilds and other top bankers. Under Wall Street direction, and through the powers of the then newly-created Federal Reserve, these titans were able to officially dominate nearly all the important areas of public life, including great expansions in consumer spending and government agency powers. The icons of this magnificent and terrible wealth were John D. Rockefeller, J.P. Morgan, Andrew Carnegie, E.H. Harriman, Cornelius Vanderbilt and a handful of others.

Today, those icons of wealth are the likes of Bill Gates, Warren Buffett, Carlos Slim, Larry Ellison, the Koch Brothers, Michael Bloomberg, Steve Jobs (now deceased), the Walton family descendants of Walmart and, again, a handful of others who are largely known for their role in the age of computers, the Internet, telecommunications and electronic devices.

The real wealth, from older robber barons accumulated in land, resources, banking and investment and commodities are still there, but remain under reported on the Forbes’ list of the world’s richest, instead ruling largely from the shadows and influential but secretive groups such as Bilderberg.

The Bill & Melinda Gates Foundation, as well as the Gates-Buffett led billionaires’ “giving pledge” are keeping in stride with the groundwork laid and continued by the Rockefeller Foundation and Ford Foundation. Heavily funded initiatives to push vaccines, birth control, population control, Western-oriented “education,” GMO and corporate-dominated agriculture and the like remain some of the most consequential and troubling policies done in the name of “good” by tax-free entities wielding enormous, nearly incalculable wealth and power.

In short, the myth of “democracy” and freedom in the United States – the beacon around the world – perpetuates, despite a few blemishes. But in reality, the Oligarchy took hold some time ago, has not let up and perhaps never will.

Let that sink in, kids. Take a good look, and let it all sink in.

And don’t forget to read Charlotte Iserbyt’s revealing and TRUE work, loaded with documents and footnotes, The Deliberate Dumbing Down of America

It helps to explain why you don’t know this stuff, why the reigns of power have been stolen from us, and why things are not soon going to get better.

Unfortunately, the late comedic genius George Carlin was all-too-right when he explained the owners of America and why the education system is broken:

And like Carlin said of James Truslow Adams’ American Dream,

”The reason they call it the American Dream is because you have to be asleep to believe it.”