Unlabeled GMO is bad enough; pharmaceuticals grown into the food of an already drugged population is downright horrifying.

“Philanthropic” causes self-appointed to look after the global good, including the Rockefeller Foundation and Bill & Melinda Gates Foundation, began funding the development of edible vaccines as far back as 1996. Ostensibly, this is to allow the poor and developing sectors of the world easy access to medicine in their food supply. A quick (and profitable) fix to save the planet!

Private vaccine developers have worked aggressively to develop these genetically-engineered pharmaceuticals and put them on the shelf, hoping they will be part of a multi-billion dollar drug market. Government grants and agency support contributed towards their rapid creation in the first decade of the 20th Century, licensing corn fields and other test crop sites throughout the U.S. midwest and beyond – with pharmaceutical crops being grown in at least 11 states.

Firms like Prodigene and Epicyte were on the cutting edge of this new “pharming” paradigm, which created its own controversy. Prodigene was fined after two of its sites containing experimental drugs for HIV, hepatitis and other serious diseases accidentally contaminated some food crops headed for human consumption. Meanwhile, Epicyte raised eyebrows and anxious questions after developing contraceptive corn, an edible spermicide that produces sperm antibodies in both sexes.

Would you trust food aid if you knew the United States’ foreign policy declared “food as a weapon” back in 1974 in the unspoken war of controlling population in your country or one near you?

Would you believe in the bold claims that genetically-engineered enriched foods can deliver necessary nutrition and medicinal treatments, knowing the complications and risks of GMO foods that have already been documented?

Would you eat Pharma Flakes if they were marketed and sold to your family, and made a part of your ‘complete’ breakfast?

And what if your cereals and other food stocks weren’t even labeled? Would you really know what was in your food? And would you do anything about it if you found out the truth? Would you have eyes to see it for what it was, if it were population control?

(Bigger report coming soon… stay with us and spread the word.) 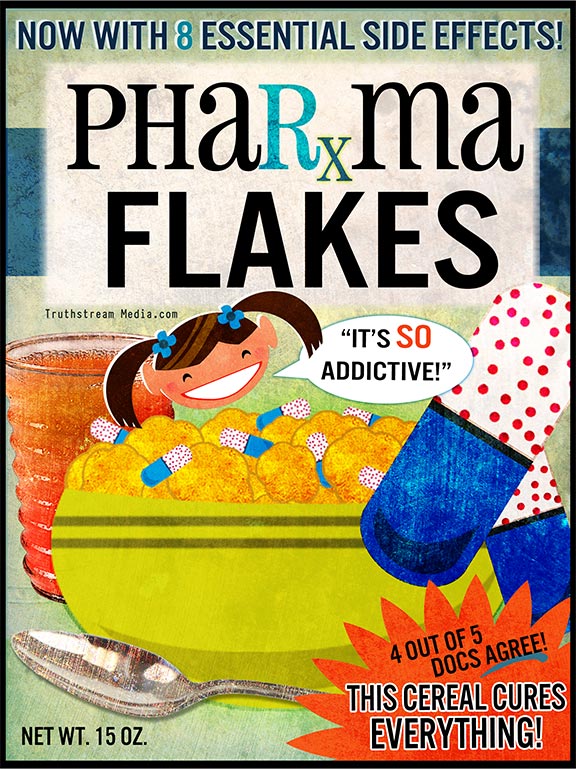 Support the Truthstream with an original Pharma Flakes T-Shirt, Sticker or See Dozens of Other Designs!