While everyone is busy arguing that control over weather doesn’t exist, or that those who claim it does are crazy, conspiratorial nutters, actual history reveals that it not only exists, but was developed for an ulterior motive.

This video provides an interesting bit on General Electric’s Irving Langmuir, his ties to the brothers Vonnegut, and the military’s attempts at destroying the enemy with wicked weather.

In the sources shown in the video, Irving Langmuir and others admit to a) steering hurricanes, b) causing a 1947 and 1948 hurricane to change course, resulting in the coastal destruction of American cities that wouldn’t have been hit by hurricanes, c) seeding clouds, changing ice/snow and rain patterns, d) creating the conditions for floods in the early 1950s which caused destruction and property damage throughout the mid-west, Galveston, Texas, e) seeding clouds in New Mexico that either denied rain to the Eastern coast of the U.S. or overwhelmed other areas with too much rain… and well, much more. 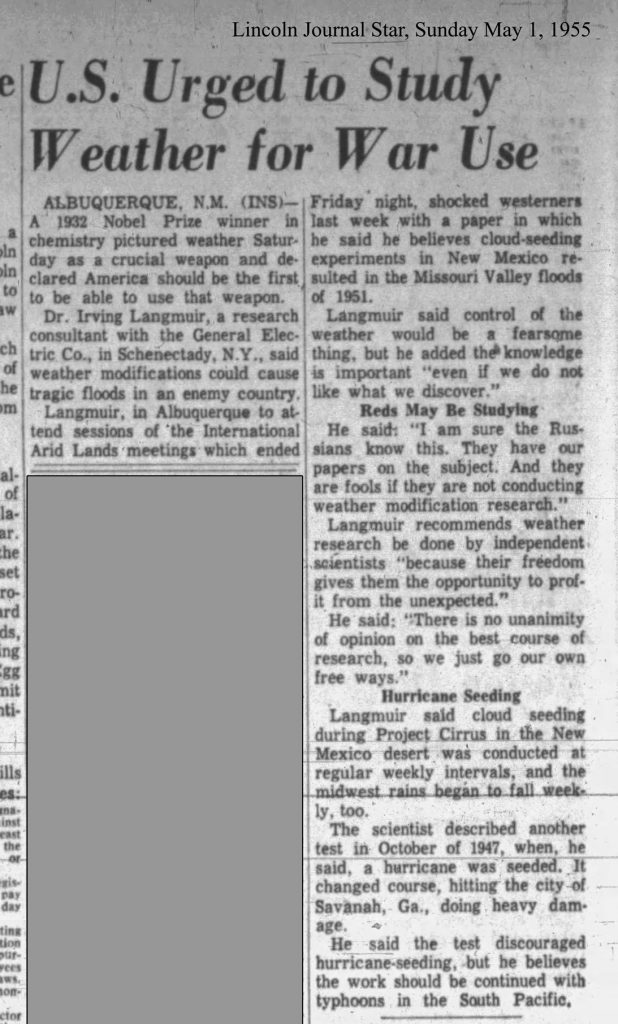 Irving Langmuir himself, though he called for using weather as a weapon of war, also cautioned that the military was undertaking weapon experiments that were creating negative consequences for American cities, people, land and crops, and admitted there was nothing he could do to stop it, despite being its progenitor. 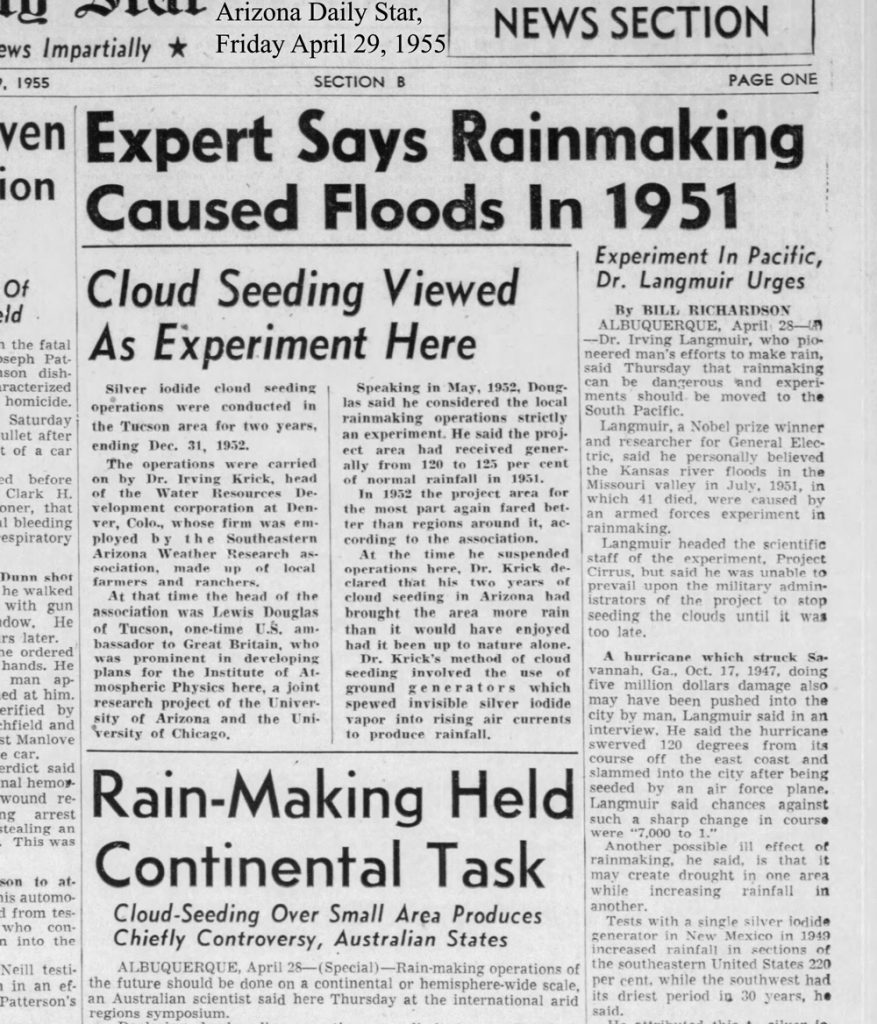 Also admitted is the fact that the lessons learned in the 40s and 50s – though leading to a 13 year moratorium on hurricane seeding – were applied to Vietnam, Laos and Cambodia in the late 60s and early 70s under the later declassified Operation Popeye – which sought to alter the course of the Vietnam War by reducing, or impacting traffic along the Ho Chi Minh Trail via drastic increases in rainfall and harsh weather. 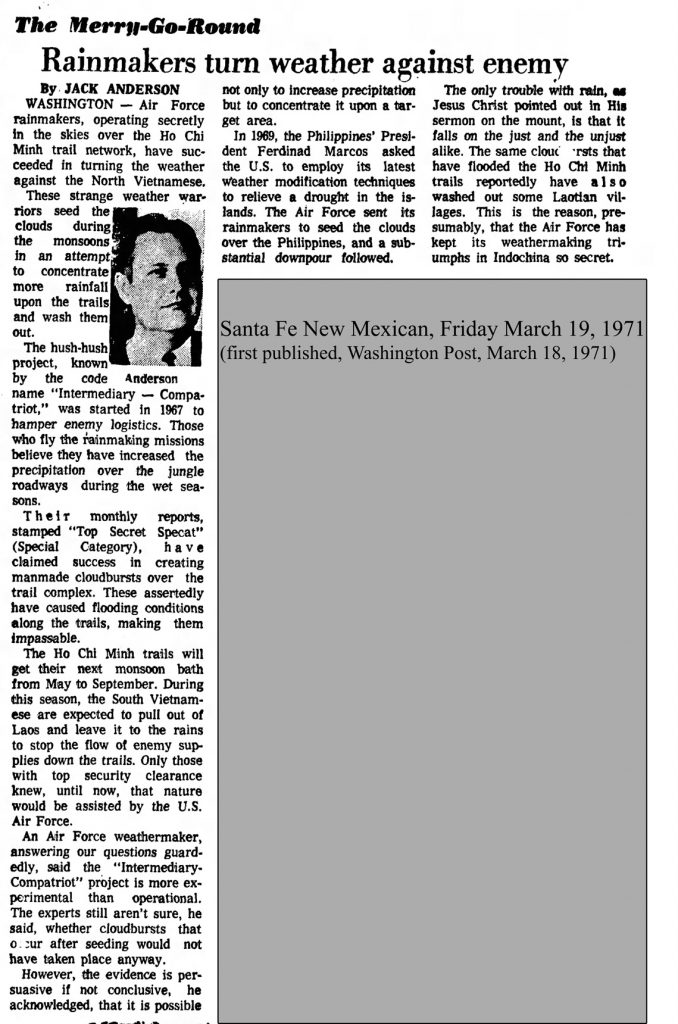 SO?! What is happening now, today, and in recent years?

Of course, it is not admitted; the issue is deflected; critics are derided as conspiracy theorists, search engines and algorithms de-list, hide and suppress discussions of ‘chemtrails’ and ‘HAARP’ and ‘weather modification.’ However, experiments are taking place – likely covertly for military purposes – and admittedly under the guise of battling global warming/climate change.

How have we reached the point where few in the public are aware of the documented existence of this technology and the phenomenon of weather control? Why is rational or critical discussion of this issue ridiculed or even banned? What is the real agenda at work here?

This stuff is documented.

In the video above, a great deal of information was found in newspaper archives, as well as internet postings. However, it is also dealt with in academic literature.

Please read (or browse through) the paper “The pathological history of weather and climate modification: three cycles of promise and hype” (PDF) by academic James Fleming, of MIT, for more discussion on a) early episodes of rainmaking and weather modification, b) the period involving cloud seeding by General Electric scientists Irving Langmuir, Vincent Schaefer, and Bernard Vonnegut, et al. and also c) the current wave of climate change modification that remains ongoing. 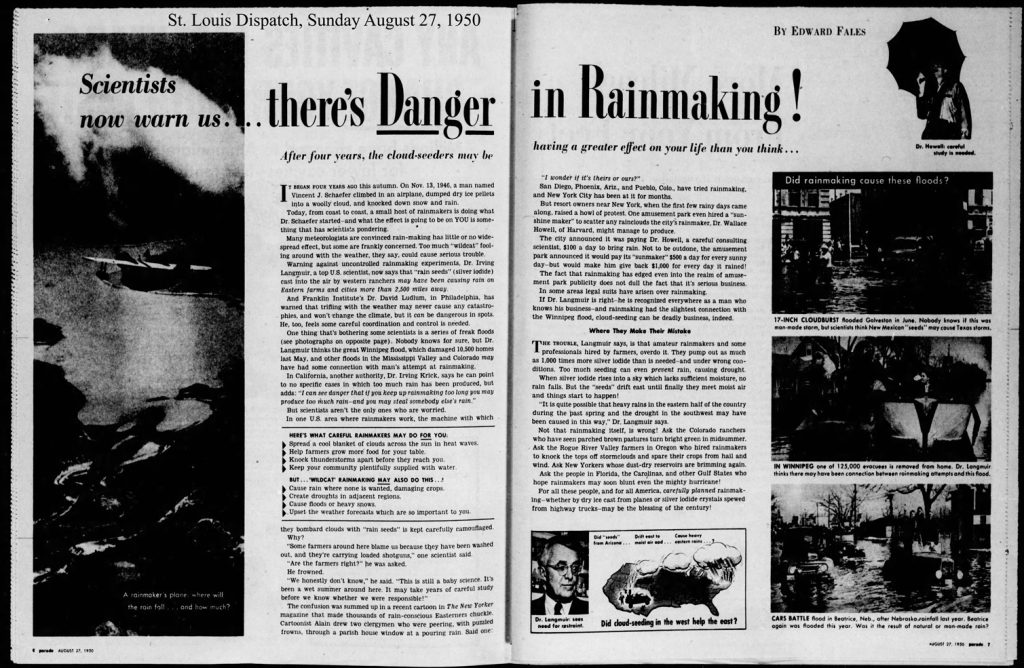 Thank you to everyone who has stood by us and supported our work (including on Patreon)! We couldn’t do it without you.

Technocracy: I Never Voted for This, Did You?
Melissa Dykes Oct 15