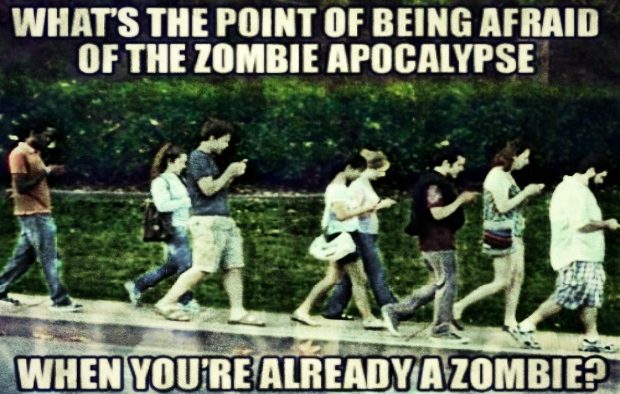 I found it incredibly hard to write about anything this week. For the first time in a long time, I found I really didn’t have that much to say.

Society is going the way of all those dystopic films. Willingly.

Not the ones about the police state or the panopticon; the omnipresent surveillance state is already here, has been for a while now. The death of privacy. The tyranny of total transparency for everyone else, national security for the State. A place where information is constantly being extorted from us. A place where police look up your color-coded threat score based on your social media posts before they ever lay eyes on you during a traffic stop or 911 call. A place where they know it is you based on four credit card purchases. A place where computers can decode your thoughts and translate them into sentences without you saying a single word. A place where we spy on ourselves and spy on each other while the system spies on everyone, every minute, every hour, every day, day after day after day.

You may have seen some of the films I’m talking about. Not the zombie apocalypse programming. Not the 2012 end-of-the-world “apocalypse” programming. I’m talking about the ones where people have been stripped of their emotions and individuality to bring order out of the chaos of nonconformity, to do away with the danger of outliers. The ones where people have been sold a mockery of “peace” built on uniformity. Where sameness saves and individuality is certain doom.

Have you seen The Giver

It all goes back to Brave New World, albeit with electronic soma, and people learning to love their servitude.

The pathway to this place has been lined with low expectations. Setting the bar so low, it’s almost on the ground.

Have you thought about what you want out of life? What your goals are? Do you have a goal? Most people don’t have the time or inclination anymore to think about what they really want out of life or what their life means. Most people have been socially engineered to believe that the only worthy goal in this world is material wealth anyway. Consumerism. The American Dream, as hijacked and sold to us since World War II by Edward Bernays.

But in a society where the 62 richest people have amassed more wealth than half the planet (and they aren’t even counting the Rothschilds), a lot of human beings have been forced down to the bottom of Maslow’s hierarchy of needs.

The physiological rung of the ladder. Treading water to make sure the most basic needs for survival are met. “I just want to be able to pay the bills” or “I just want a car that doesn’t break down every other five minutes so I can get back and forth to the job I don’t really like but am forced to go to every day so I can pay the bills.”

If you have that covered, the next level is safety. Security. Health. Stability. Children aren’t even raised to know what stability is anymore. Considering we live in a society based entirely on fear, mostly fear of death, this one is hard for the majority to get past. Without fear, the perpetual terror programmed into us, the constant state of emergency that justifies more and more centralized power over a society programmed to be paranoid so it will passively hand off its rights, well… they couldn’t justify more and more and more control mechanisms without that constant fear.

And those bottom two levels of the pyramid are where more and more people are living out their entire lives in our modern, techno-driven world.

If you call it living. I’m not sure what it is sometimes, to be honest. Sleepwalking might be more appropriate. Instagram. Tweet. Vines. Bite-sized chunks of our day passed off in a sentence or two on a social media platform. If someone hits “like,” guess that means you exist. Jack Handey had deeper thoughts.

The other day a woman on her cell phone almost walked right into us in a store. She was completely oblivious to the world happening around her. The store could’ve been bombed, she could’ve been mugged, a dragon could’ve swooped down from the skies and snatched her up and she might not have even noticed any of it. Aaron turned and apologized, as if he had been in the wrong, then realized she wasn’t paying attention anyway. He remarked, “Never mind, you aren’t even paying attention are you?” The woman just continued to drift away from us, dreamily, like a ghost. It took her at least 20 to 30 steps before she turned back and shoot a stern look in our direction, like the comment finally caught up with her brain, long enough after the fact that we weren’t even sure if she fully knew why she looked back at us to begin with.

And people have walked into walls this way. Light poles on sidewalks. Or they’ve drifted off those sidewalks and into oncoming traffic while talking on those phones. They get on the phone behind the wheel of a car, turning it into a death machine on wheels. They’ve checked out. They’re neither here, nor there.

Where has everybody gone?

It’s happening earlier and earlier. The social engineering that it’s normal to have a smart phone/palm-sized supercomputer on your person at all times anywhere you go. Seventy seven percent of two year olds now use mobile devices on a daily basis, according to a recent study. Can you believe it? On top of that, parents use these devices as stand-ins and babysitters: 70 percent give their kids mobile devices to keep the children busy while they do household chores, 65 percent do it to keep their kids calm in public, 58 percent to run errands, and 28 percent to put their children to sleep at night. Wow. To say nothing of the effects of children absorbing microwave radiation in higher amounts than adults, if a cell phone could cook dinner, put bandaids on boo boos and give hugs and kisses, would kids even need parents? (Oh wait, that’s what the robots will be for…)

And I feel old for remembering a time when people went to the grocery store and made it through the produce section without calling someone. Fancy that.

Worse, however… recent studies have also shown that babies raised by cell phone/technology distracted parents may actually be missing vital social cues in a biological window that — without that undivided attention given at the proper time — it is detrimental to the development of the child’s nervous system. If missed, it may literally effect the child’s ability to process pleasure properly for the rest of his or her life.

We’re right back to that dystopic society of emotionless drones…

And there it is. The cybernetic new world order out of chaos… the churning out of automatons, living things turned into and programmed like and by machines, assimilated into a network, a system where the “smart” devices are the millions of micro-mechanisms of control over the masses.

What reality are we crafting? What is this place gonna look like in ten years? Five?

Will we become less like ourselves, even as we become more obsessed with ourselves? Know thyself? Or know thy Facebook profile version of thyself?

This place feels more like the Matrix by the day. Oh, and now DARPA is working on a microchip implant (aka wetware, to make it sound cool) that will use the electrochemical signals in our brains to control computers. DARPA who designed the Internet I’m typing this on right now. A brain implant. Can you see people lining up for this hip, trendy new tech? Stories on this new and exciting development described it with lines like, “The federal government wants to read your mind…”

Does anyone even realize or care how far down the rabbit hole we’ve fallen?

Is there anybody… out there?

Previous Article
If They Would Feed Radioactive Oatmeal to Little Kids, What Wouldn’t They Do?
Next Article
The Coming Hive Mind: Man/Machine Merger and the Global Transhuman Society