Flashback: “We’ll Know Our Disinformation Program Is Complete When Everything the American Public Believes Is False.” 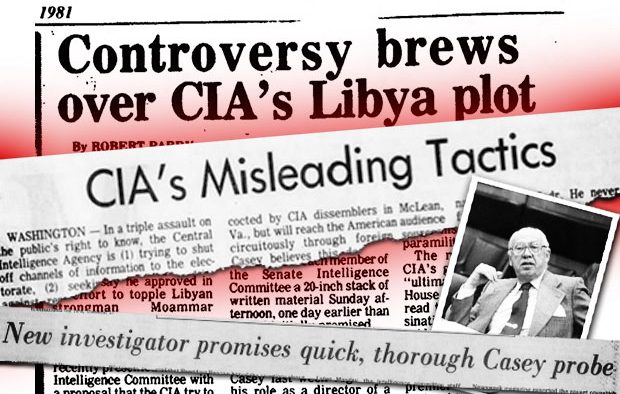 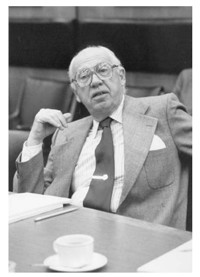 “We’ll know our disinformation program is complete when everything the American public believes is false.”

The creepy quote above has been widely attributed to Former CIA Director William Casey.

But did William Casey really say this quote?

The quote itself has been passed around extensively on the Internet, and some people claim Casey never really said it because the only main source it traces back to is late political researcher and radio show host Mae Brussell.

Brussell was the host of the radio show Dialogue: Conspiracy. She got her start when, as a radio show guest, she questioned the official JFK assassination story and the Warren Commission Hearings by suggesting that Lee Harvey Oswald wasn’t the only person involved in Kennedy’s murder. Perhaps the propagandized label of “conspiracy theorist” is the reason why people question the quote Brussell often repeated.

However, Brussell is not the only person that can be attributed to this sharing quote.

Someone posted this meme on Quora back in 2013 with the note, “A disclaimer: I just like Quorans debunking or showing the stupidity behind some of the worst FB memes.” 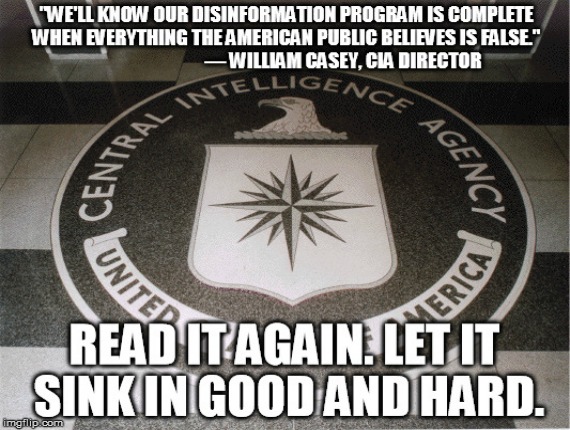 This is a new trend lately, people trying to debunk old (and most especially, establishment damaging) quotes.

This time, however, someone who claims to have been there when Casey said it showed up to validate the quote: 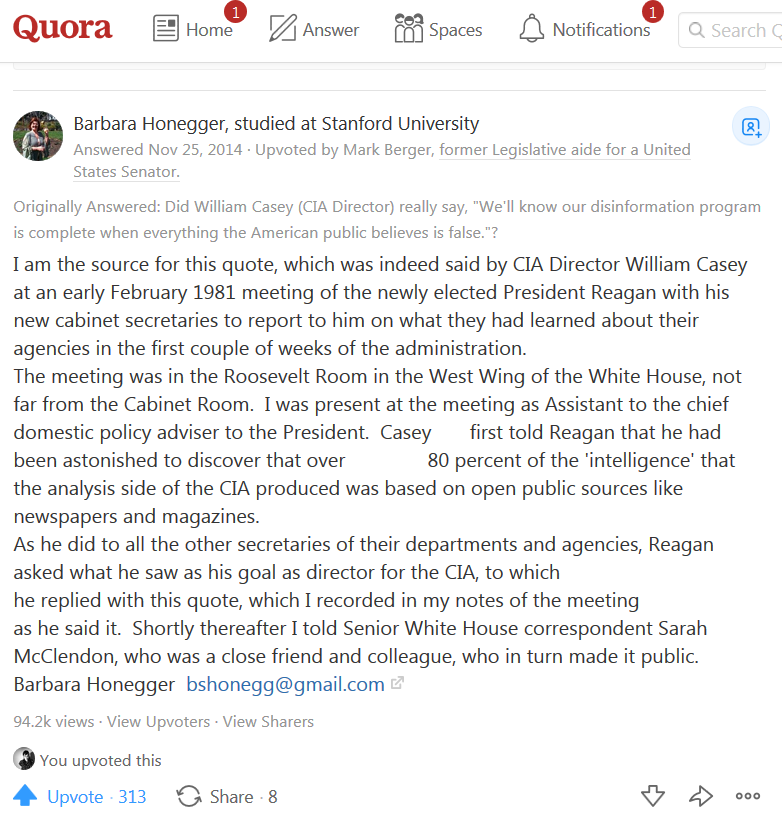 “I am the source for this quote, which was indeed said by CIA Director William Casey at an early February 1981 meeting of the newly elected President Reagan with his new cabinet secretaries to report to him on what they had learned about their agencies in the first couple of weeks of the administration. The meeting was in the Roosevelt Room in the West Wing of the White House, not far from the Cabinet Room. I was present at the meeting as Assistant to the chief domestic policy adviser to the President. Casey first told Reagan that he had been astonished to discover that over 80 percent of the ‘intelligence’ that the analysis side of the CIA produced was based on open public sources like newspapers and magazines. As he did to all the other secretaries of their departments and agencies, Reagan asked what he saw as his goal as director for the CIA, to which he replied with this quote, which I recorded in my notes of the meeting as he said it. Shortly thereafter I told Senior White House correspondent Sarah McClendon, who was a close friend and colleague, who in turn made it public.”
— Barbara Honegger

Not only does Honegger claim he said it, but apparently he said it in response to what he saw as his goal as CIA Director!

This statement was further backed by an email posted by Quora user Greg Smith from Honegger regarding the quote which is consistent and apparently prompted her to tell the story above:

“Seriously — I personally was the Source for that William Casey quote.  He said it at an early Feb. 1981 meeting in the Roosevelt Room in the West Wing of the White House which I attended, and I immediately told my close friend and political godmother Senior White House Correspondent Sarah McClendon, who then went public with it without naming the source… “

So there you go. Guess it boils down to he said she said, except when she says it, it’s because she was actually there…

The year 1981 was an interesting one for Director Casey. He just so happened to be under investigation and fighting to keep his new job over various seedy dealings that came to light; among them were claims he approved a plan to overthrow Libya’s Moammar Qaddafi to instill a shadow government. (Oh I know, our government would never do that, would they?)

The agency’s plan, according to an article in the July 27, 1981 Gettysburg Times, involved toppling Qaddafi via what else? 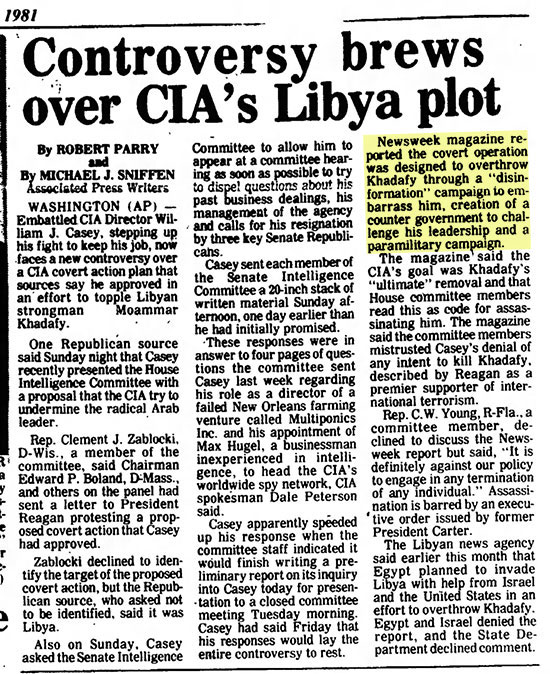 “Newsweek Magazine reported the covert operation was designed to overthrow Khadafy through a ‘disinformation’ campaign to embarrass him, creation of a counter government to challenge his leadership and a paramilitary campaign.” 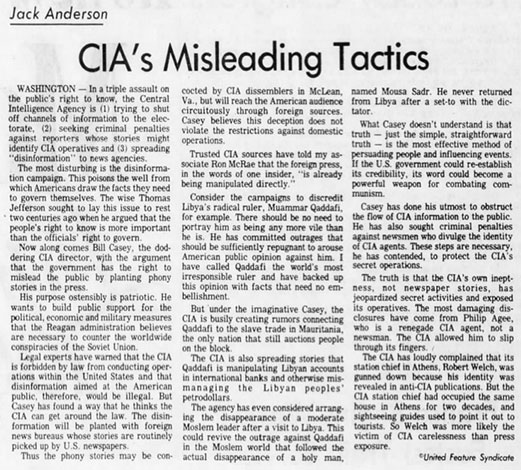 Anderson points out the CIA’s “triple assault on the public’s right to know” included 1) trying to shut off channels of information to the electorate, 2) seeking criminal penalties against reporters whose stories might identify CIA operatives, and the third which Anderson called most troubling, 3) spreading “disinformation” to news agencies.

And who else does Anderson specifically call out in this disinfo campaign but new CIA Director William Casey:

“Now along comes Bill Casey, the dodering CIA director, with the argument that the government has the right to mislead the public by planting phony stories in the press.”

Oh really? So the good director not only talked about his disinformation campaign but actually argued for the government’s right to wage it against the American people?

The plan involved getting around the ban on CIA operations on domestic soil by planting disinfo stories in foreign news outlets that were routinely picked up by American mainstream media agencies. Anderson also points out the various rumors and false stories going around surrounding the goings on in Libya at the time…

The bottom line here is, if anyone in our government was going to make the above disinformation statement and specifically in 1981, all available evidence points to no better person who would have likely said it than Casey.

Finally on an aside, there seems to be this mission lately to memory hole quotes or muddy the water about who said what and change history.

In this particular instance, someone who was there when William Casey said the line in question and claims to have literally heard the words come out of the man’s mouth with her own ears as he said it is vouching that this quote is true.

Then again, this is the same agency on record behind the government’s MKUltra mind control program

, an illegal project in which the CIA experimented on Americans for over two decades (that we know about) to manipulate mental states and brain function with everything from drugs to microwaves — the kind of stuff DARPA is openly working on today — all of which makes the piddly quote in question here seem like mere child’s play by comparison.

Even so, people still went into the Quora thread afterwards to claim — with absolutely no evidence whatsoever as they were not personally there — the quote is false.

So, in a bitter twist of the saddest irony possible, it would seem the contents of the quote itself are also true.

Previous Article
Forgotten History Lesson: America Is the Same ‘Ol Oligarchy It Was over a Century Ago
Next Article
1975 Video: CIA Admits to Congress the Agency Uses Mainstream Media to Distribute Disinfo

Wasn't going to make a vid on this, but couldn't keep it in. This control by fear merry go round is getting really... not just old, but utterly ridiculous.

At least in the civil stuff back in the 50s, they spoke to people like they were adults.
https://youtu.be/OuEi5bGcctg