Ever wonder how Homeland Security Secretary Janet Napolitano keeps her cool during all of those stressful press conferences? 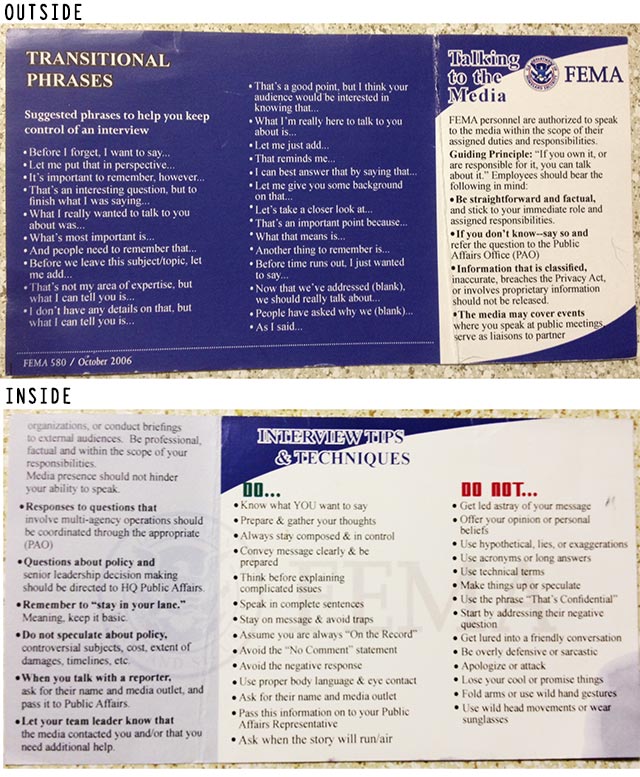 Received this from a fan. I think my personal favorite is the reminder to “stay in your lane.” You know, “Meaning, keep it basic.”

“Hey Napolitano, what’s up with all those mass bullet buys? Do you know something we don’t about why DHS needs billions of hollow point bullets?”

“That’s an interesting question, but to finish what I was saying…”

Potential jokes are seemingly endless. If a FEMA worker sees something, he or she should say something…but not before checking this card first!

Actually, this reminds me of that one time during the 2007 southern California wildfires when FEMA set up a press conference filled entirely with members of its own staff posing as reporters. The real press was only given a 15-minute lead on purpose, completely insufficient time to show up. A few ‘softball’ questions were asked and answered by then-Deputy Administrator Harvey Johnson, and he even bothered to stand at an official-looking podium and everything while he took his time praising FEMA’s response to the emergency.

“We’re told the questions were asked by Cindy Taylor, FEMA’s deputy director of external affairs, and by “Mike” Widomski, the deputy director of public affairs. Director of External Affairs John “Pat” Philbin asked a question, and another came, we understand, from someone who sounds like press aide Ali Kirin.”

Not a single tough question was asked. Imagine that. Clips from the press conference even aired on several mainstream media outlets including FOX and MSNBC.

For more on FEMA’s respect for the press and high regard for transparency, sees FEMA Attempts Media Black Out in New Orleans and FEMA a Disaster for Freedom of the Press: Katrina victims ‘not allowed’ to talk to media, reporter told.

TSM is also a participant in the Amazon Services Associates Program, an affiliate program designed to provide a means for sites to earn a small referral fee by linking to products on Amazon.com. It's not an additional charge or anything, it's just another way for TSM to support itself by adding Amazon links when we discuss books or movies you might wanna check out... You can also CLICK HERE when you shop at Amazon to support us!
© Truthstream Media 2013–2020