While the official line is still emerging in the wake of the Boston Marathon bombing, the language is already being coordinated.

“We encourage the public to be vigilant, and to listen to direction from state and local officials.”

Now let’s take a look at statement excerpts released by other public officials: 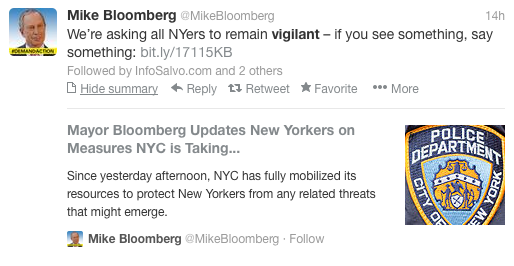 NY Senator Greg Ball: “While reports remain unclear, it is important that New Yorkers and all Americans remain vigilant. The blessing of freedom bears an enormous responsibility and we must all work together as a community to watch over each other. We must always be alert and remember that our brave citizens are our very first line of defense. If you see something, say something.”

NY Senator Jose Peralta: “The tragedy speaks to the need for continued vigilance against terror and to the outstanding work of the NYPD in ensuring our safety in New York City.”

New Jersey Governor Chris Christie: “It’s always to be aware and alert. You know we run those public service announcements all the time, ‘If you see something, say something,’ and again this shows the importance of that. You can’t ever have enough police, enough agents, to patrol a state as big as this state or a country as big as this country. We need all our citizens to be vigilant too.”

New York State Assemblyman Phil Goldfeder: “I am asking everyone to stay vigilant, and please help our officers protect our communities by following the simple rule, if you see something, say something.”

New York City Mayoral Candidate Sal Albanese: “As the NYPD beefs up security, New Yorkers must stay vigilant. A decade of strong anti-terrorism efforts have helped keep the city safe, but we can never allow ourselves to become complacent.”

NYC Comptroller John Liu: “The bombings at the Boston Marathon show that cities must redouble their vigilance in combating acts of terror and sabotage.”

Denver Police Department spokesman Lt. Matt Murray: “We do remind citizens that safety is everyone’s responsibility…People should be vigilant and if they see something, say something.”

Erin Lynch, Mid-America Regional Council homeland security program director: “It’s a reminder of the uncertain times we live in and how critical it is to remain vigilant and to be prepared.”

Hernando County, Florida Sheriff Al Nienhuis: “Although we are not a target-rich environment, all citizens should remain vigilant to their surroundings, especially as it pertains to neighborhoods and public gatherings.”

Bill Thompson, ex-comptroller and Democratic candidate for NYC mayor: “The incidents today remind us that we need to always stay vigilant, and that we can never let our guard down when it comes to keeping our cities safe.”

Rev. Erick Salgado, Democratic candidate for NYC mayor: “In times such as this, it is important that we all remain calm and put our trust in the law enforcement professionals charged with keeping us safe. New Yorkers can take comfort that, even though no threats have been reported, counter-terrorism police officers have been deployed and security throughout the City has been heightened. This is why we must maintain a strong police force even as all New Yorkers remain vigilant for suspicious activity.”

Canadian Public Safety Minister Vic Toews: “[Canadian authorities are on a] ‘heightened state of vigilance, especially with respect to our border crossings.’

Examples go on and on and on and are too numerous to list without taking forever. San Mateo County, California officials have vowed the county will remain “extra vigilant.” One can only surmise this means the whole county was already vigilant and, upon being told to be vigilant, county vigilance dutifully doubled.

After the 9/11 terrorist attacks, being ‘vigilant’ became the new thing we were all instructed to do at all times. After all, a terrorist could attack at any moment, so we must be vigilant. A quick search also reveals that, on almost every anniversary of 9/11 since, a plethora of public officials and the mainstream media all across the country go through the same rhetoric cycle, reminding America to never forget and to be vigilant like clockwork.

It would actually make a fun parlor game, as you can literally search the terms “9/11,” “vigilance” and any official you can name, and you will come up with stories urging vigilance. Right away, I found President Bush claiming that vigilance was key in the War on Terror on the 5th anniversary of 9/11, as well as former Homeland Security Secretary Tom Ridge urging vigilance ahead of the 2004 Presidential Elections, during which time we know that he admittedly elevated terror alerts despite any prevailing evidence of a real threat in order to score political points for the Bush Administration.

Former Homeland Security chief Michael Chertoff, who advised the adopting of body scanners in airports, claimed the U.S. was being extra-vigilant in the wake of a British terror scare circa 2007 while also signaling the need for vigilance during the transition to Barack Obama’s presidency in 2008. If those examples aren’t enough, try finding some of your own… it won’t be hard.

In fact, as long as we’re tying in examples of vigilance, please note that the highly suspicious training exercises on, or prior but related to, 9/11 were called Operation Northern Vigilance, The Vigilant Warrior and Vigilant Guardian.

As we’ve reported before, targeted language and propaganda is used to shape the agenda, mold public perception, and in this case, keep us all in a heightened state of fear. It’s the same reason the mainstream media is currently replaying the Boston Marathon explosion footage over and over and over — to shape our collective behavior.

Has the nearly 12 years since 9/11 been long enough for that recharge?