If you live in America, please note, this just happened here.

Younger generations are being brainwashed that the only thing more dangerous than our Second Amendment is our First. They are being socially engineered to believe that it is literally a crime for anyone to offend them. They are being taught that they can run to a police officer and tattle like a bratty five year old if someone hurts their feelings and that the offender will actually suffer legitimate criminal prosecution for committing such a high crime.

The rest of us who haven’t been sucked into the progressive education system that promotes trigger warnings, make believe microaggressions, and magical “safe spaces” know this isn’t how reality works. There’s no such whimsical fairy land where everyone holds hands and sings Kumbaya on every point and not a single person gets their feelings hurt ever.

In fact, if such a world existed, not only would it be dreadfully dull but eventually feelings would cease to exist, because people would forget how to have them. But I digress…

THIS TIME when a sorority girl got “offended” and ran to a campus cop because a street preacher was spouting his religious views against promiscuous and homosexual sex, not even technically on a college campus but within earshot of it, the cop actually did it.

He ticketed the man… FOR OFFENDING SOMEONE.

You need to watch this.

The guy did not even cuss. The words he was cited for using were “anus” and “penis,” literally names of body parts. And, amazingly, the officer not only told the man his job was to protect college students from being offended, but that it is illegal to offend someone because free speech doesn’t matter if that speech has offended someone. The cop was serious, too.

He even reiterated why he was ticketing the street preacher to what appeared to be his supervisor and that cop also seemed in total agreement that it’s okay to ticket someone for “disorderly conduct” for the “crime” of offending someone. In a follow-up video, the guy shows off his ticket which says he offended a sorority girl, as if offending a sorority girl is a real crime in America that someone can be ticketed for.

The whole reason the First Amendment free speech clause exists is to protect speech that might offend someone. There’s no need to protect inoffensive speech. That should be obvious enough, but apparently it has to be explicitly stated in modern America.

Yep. This is modern America, and what you just saw isn’t a spoof or a joke. It really happened.

After a phone call from a lawyer, the ticket was rescinded and an apology made, complete with promises the officer was going to receive “training”. We are talking about a police officer who has the right to ticket people and arrest them and who was out doing so for NON-EXISTENT CRIMES. Shouldn’t he and all his cohorts in the video above have already had that training before he was set loose to “protect” college students and punish their “offenders”?

Sadly, it’s not even a surprise that American police officers these days are not taught about the Constitution and Bill of Rights. It’s not shocking anymore to see a cop fail so hard at the law he’s supposed to be upholding. The most shocking thing in this video isn’t even in the video but what happened before the camera began rolling. What’s shocking is that we have young adults walking around in AMERICA thinking that it’s a perfectly normal and acceptable thing to do to run and tell a cop when they have been offended.

And in this case that young woman is going to continue to believe that, considering the cop vindicated her complaint by upholding a law that doesn’t exist in this country on her behalf.

The college students of today have been brainwashed with a politically correct agenda that has left them unable to take a joke. Watching Triumph the Insult Comic Dog at a college campus would normally be funny if it wasn’t so horribly painful to see the students’ pained reactions to his politically incorrect sense of humor:

Comedians like Jerry Seinfeld have publicly announced they avoid doing shows at colleges because the students today so politically correct, their thinking so agenda-sculpted and driven, they don’t even know what words mean anymore.

“I hear that all the time,” Seinfeld said. “I don’t play colleges, but I hear a lot of people tell me, ‘Don’t go near colleges. They’re so PC.’ I’ll give you an example: My daughter’s 14. My wife says to her, ‘Well, you know, in the next couple years, I think maybe you’re going to want to be hanging around the city more on the weekends, so you can see boys.’ You know what my daughter says? She says, ‘That’s sexist.’ They just want to use these words: ‘That’s racist’; ‘That’s sexist’; ‘That’s prejudice.’ They don’t know what they’re talking about.”

He’s right. They don’t know what they’re talking about. Case in point: when the attacks went down in Paris, it happened during the protests about… what were they about again? A poop Swastika of unknown origin near the campus and some racially-charged remarks someone said? Let’s just generally say the campus-wide protests about whatever at Mizzou. Some of the college students there were Tweeting to whine about the events in Paris taking their spotlight and how what was going on at their campus was also terrorism, while reports of what everyone else would consider actual terrorism were coming out of France. 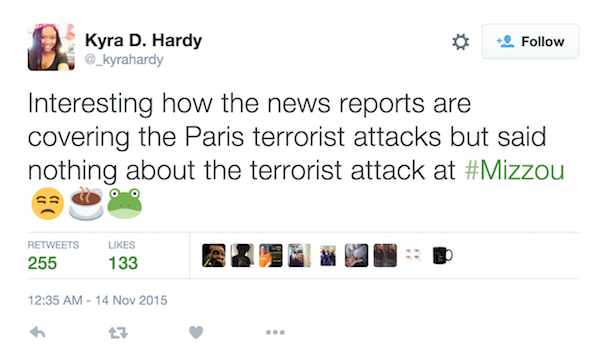 That’s because there was no terrorist attack at Mizzou. Get a dictionary, please (while they still exist).

“Such a reaction is understandable, if grimly hilarious,” Breitbart’s Milo Yiannopoulos wrote. “These kids been raised by indulgent parents, instructed by professors racked with middle-class white guilt who secretly hate themselves and western culture, and promoted by a sympathetic media which bends over backwards to put them in the best light and paper over their tantrums.”

But it’s all part of an agenda to silence any opposition to the system. What we’re seeing happen to younger generations in our society is like reading a page out of Orwell’s 1984:

“By 2050—earlier, probably—all real knowledge of Oldspeak will have disappeared. The whole literature of the past will have been destroyed. Chaucer, Shakespeare, Milton, Byron—they’ll exist only in Newspeak versions, not merely changed into something different, but actually contradictory of what they used to be… The whole climate of thought will be different. In fact there will be no thought, as we understand it now. Orthodoxy means not thinking—not needing to think. Orthodoxy is unconsciousness.”

By killing words and making them meaningless… by destroying the literature and rewriting the dictionary so its doubleplusgood, what’s really happening is the narrowing of the range of thought. The youth have been raised without any real critical thinking skills. They have been trained not to question anything. They have been “educated” to not know what words really mean.

Meanwhile, words have been weaponized and demonized. More Orwell:

“Don’t you see that the whole aim of Newspeak is to narrow the range of thought? In the end we shall make thoughtcrime literally impossible, because there will be no words in which to express it. Every concept that can ever be needed will be expressed by exactly one word, with its meaning rigidly defined and all its subsidiary meanings rubbed out and forgotten.”

We are currently at the thought crime stage.

Pronouns are the latest on the chopping block. Campus professors across the country are literally banning words like “husband,” “wife,” “mom,” and “dad” from their classrooms as a part of their communication policy because these aren’t “inclusive” enough, whatever that means. Forget that, biologically we are mammals born with either female parts or male parts which is simply a physical reality that has nothing whatsoever to do with what our brains think about what gender we “identify” with.

But I digress again… Eh, let’s go with it.

While we’re being dehumanized as we move through the technological automation of society and eventual androgynous hive mind Borg, the individual must be destroyed to get with the program. Traditional roles and values must go. We’re seeing this push everywhere. Here’s a magazine cover I passed in the grocery store last week: 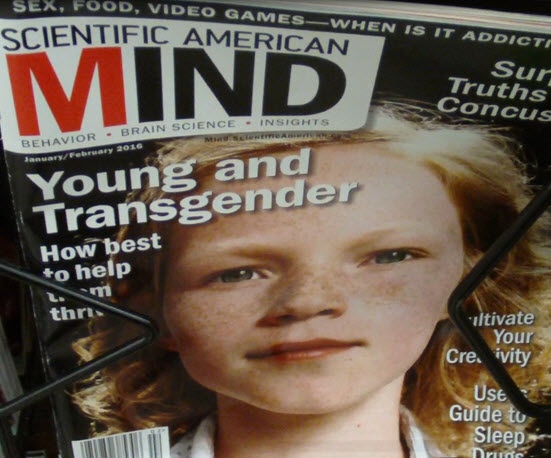 Recently a young woman on Twitter was arguing that it is wrong to use “he” or “she” when you talk about a baby or a toddler. Apparently you should call babies “babyself” and “toddlerself” instead of “him” or “her” now. Why? 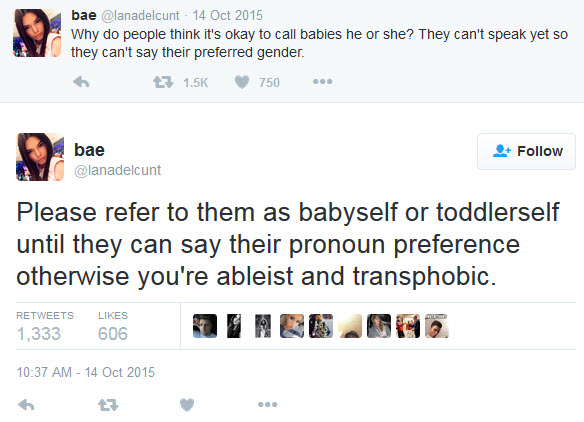 Wait until hate speech and antisocial behavior laws make their way over here. It’s only a matter of time.

‘Without Freedom of Thought, there can be no such Thing as Wisdom’
Aaron & Melissa Dykes Jul 04