What Is This GWEN Tower Really For?

In the realm of government conspiracies discussed on the Internet, it doesn’t take long to find discussions about GWEN towers. The topic comes up again and again in forums regarding government mind control programs. Here’s a complete explanation breaking down how this could work.

The potential for attuned frequencies, and extremely low frequency (ELF) waves in particular, to be used to electronically stimulate areas of the brain and alter mood has been well-documented in scientific research for decades now. Moreover, microwaves have allegedly been put to use in covert warfare since the early days of the Cold War.

Are signals directing the population to remain calm, become aggressive, desire and consume products, to enter a sleep state or to be artificially programmed to be happy, sad, depressed or enraged? Is this a truly plausible scenario? Can this really be happening?

Are such signals really capable of changing the landscape in a quiet war with silent weapons?

Here’s what we found after several attempts to track down a verifiable GWEN tower:

GWEN stands for Ground Wave Emergency Network, a program from the late Cold War which officially began in 1982, erected throughout the 1980s and early 1990s with what would seem a dubious purpose.

The Google summation: “A GWEN station transmits up to a 300-mile radius, the signal dropping off sharply over distance. The entire GWEN system consists of, (depending on source of data), from 58 to an intended 300 transmitters, spread across the USA, each with a tower 299-500 ft high.”

The towers include 350-foot copper wires that fan out from underneath the structure through the ground like umbrella spokes, interacting with the Earth, meaning signals can travel down into basements, etc. GWEN transmissions are between VLF 150 and 175 KHz, but the towers also emit UHF waves of 225 to 400 MHz. The towers shoot enormous bursts of energy, but the waves hug the ground, which is supposed to be a way for military communications to withstand an EMP or nuclear attack.

There was a lot of mystery surrounding the GWEN tower project, much of which has persisted throughout the years. Although the program was first defunded by Congress in 1990 and then again for the final time in 1994, some of these towers still stand today. Information on the web regarding exactly where GWEN towers are located, however, is sketchy at best.

Stranger still are newspaper articles regarding GWEN when the Air Force was first constructing the system. Military town hall meetings were met with great resistance. Large groups of people protested in cities across America for multiple reasons, including not wanting their town to be a Russian nuclear target, to what people felt might be the real reasons behind building GWEN which many felt had absolutely nothing to do with nuclear war… everything from weather manipulation in conjunction with HAARP to mass mind and behavior control.

In an article from the Greenwood, South Carolina Index-Journal dated Sept. 26, 1986, Nancy Foster who was co-director of an anti-GWEN activism group, attended a public meeting and noted that an early Air Force environmental assessment curiously made zero mention of GWEN being used in nuclear conflict. An August 1986 article in The Gettysburg Times outlines Gerald Depew’s BBC appearance against GWEN. Depew noted that the tower network was quote, “not expected to be functional for more than a half-hour after the start of a nuclear barrage.” Sounds real helpful in that case, right? Depew also maintained that the towers were about protecting high-ranking military and government members only, not average American citizens.

But perhaps even more concerning is an article from the June 18, 1993 edition of The Indiana Gazette, well after the Cold War supposedly ended and well after Congress first started defunding GWEN in 1990.

Then Secretary of Defense Les Aspin (Council on Foreign Relations) was quoted as scoffing at the idea of nuclear war, saying it had “receded to the vanishing point.” The article goes on to question, and rightly, why, then, did Aspin turn around just a few weeks later and begin pushing ahead once more on finishing the GWEN tower project… if the entire reason for the system really was based on what was in his own words the nonexistent threat of nuclear war in the first place. 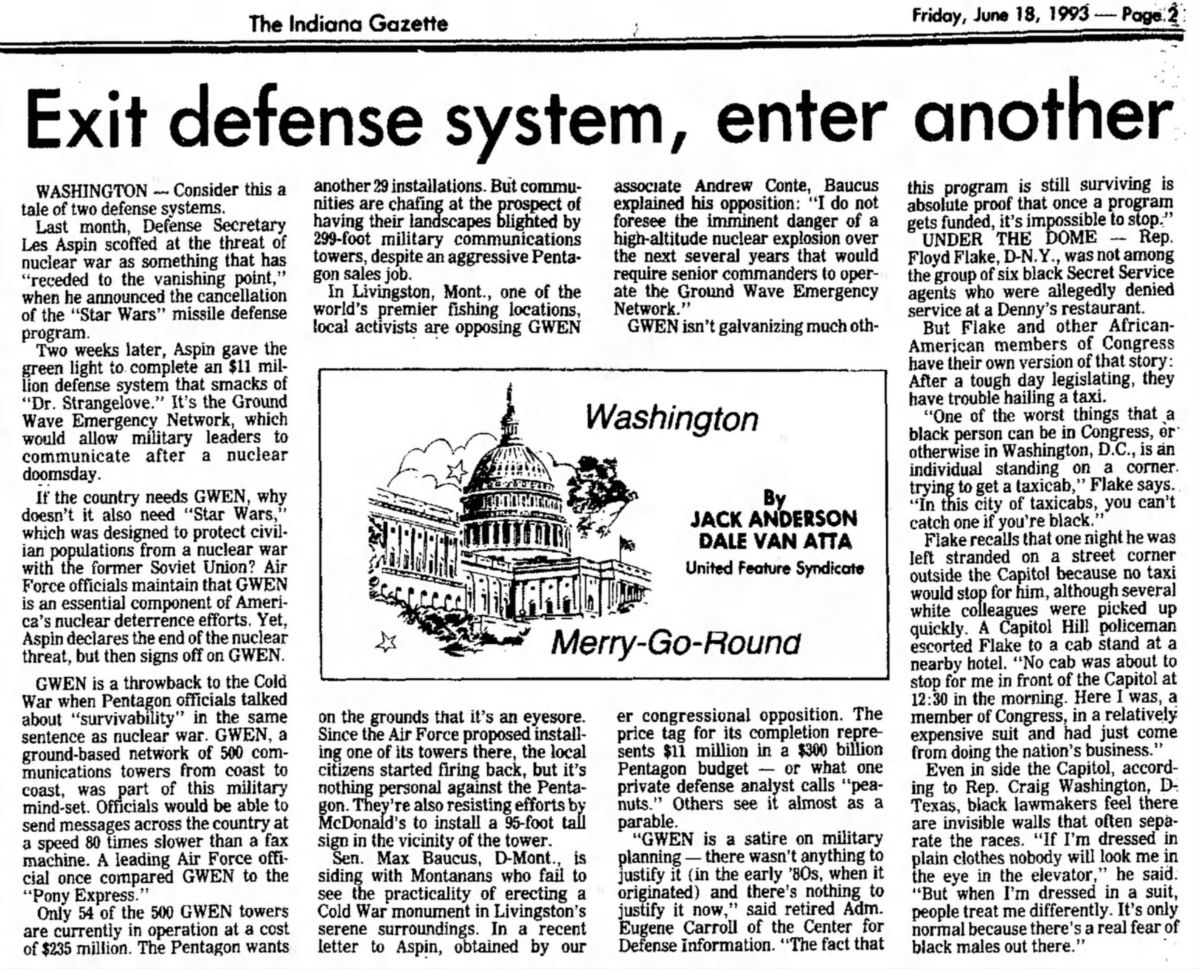 So did GWEN have a darker design?

Why build an $11 million network of towers that it would seem had no real justifiable purpose?