“Paypal Mafia Don” Peter Thiel brings technocratic control of “big data” to the forefront of Bilderberg’s 2013 agenda via Silicon Valley’s partnership with the NSA and CIA.

The age of “big data” is reluctantly upon us, and it affects almost everything, as Bilderberg’s 2013 talking point suggests. Their secretive closed door discussion on massive stores of data, collected from the biggest portals on the Internet and analyzed in the pursuit of NSA objectives, is being led by Dr. Alexander Karp, the co-founder of Palantir Technologies.

The firm has admittedly been set-up with $2 million in seed money from In-Q-Tel, the private funding arm of the CIA, and the aid of Peter Thiel, Silicon Valley’s so-called “PayPal Mafia” Don who helps direct Bilderberg’s agenda and invitees as a member of its Steering Committee. Nart Villeneuve from Information Warfare Monitor, former Homeland Security chief Michael Chertoff – responsible for bringing full body scanners to airports – and former chess world champion Garry Kasparov, also a Bilderberg attendee, have all been invited to speak at Palantir discussions dubbed “Palantir Night Live.”

Gen. Keith B. Alexander, the director of NSA and commander of US Cyber Command, testified in Congress on the cyber warfare program that was launched officially in 2010. Alexander discussed in part the fact that Palantir Technologies is contracted by the NSA for datamining and cyber attack operations.

A hit team in the infowar, Palantir developed recommendations to target the grassroots leadership, supporters and financiers of Wikileaks and Anonymous, and even outlined the need to target media dissidents like Glenn Greenwald, perhaps the foremost critic of drone strikes. Related firms like HBGary Federal have also been involved in targeting these groups. (Palantir supposedly apologized and disassociated with HBGary.)

This thorough article in the Washingtonian, while glowing over Palantir’s supposed ability to stop the next terrorist attack, explains the deep and troubling connections of this Silicon Valley start-up firm with national security intelligence circles, and its growing importance in Washington, D.C.:

Washingtonian – KillerApp: Have a Silicon Valley Geeks Found Out How to Stop Terrorists? 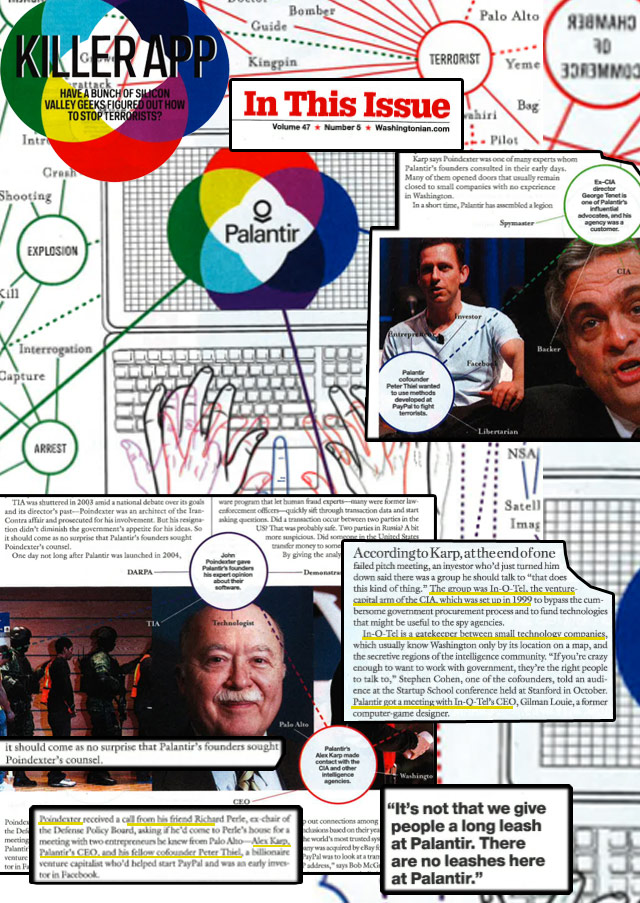 And Then They Came for the Books…
Aaron Dykes Oct 20