Appearing as a lone miracle worker building nation states in the desert, T.E. Lawrence was an operative for the Rhodes Roundtable agenda towards world empire.

This article establishes a historical parallel between the Rhodes Secret Society operative, T.E. Lawrence, who worked covertly towards a federated global British empire in his Arab operation, and Jared Cohen, the Google Ideas founder who has been carrying out covert regime change via the Arab Spring revolutions on behalf of a new world order. Full full context read the article Google Hails Age of Cyber War & Digital Revolution.

As a Rhodes Scholar who had “spent time in Iran” and “hung out in Iraq during the war,” Cohen has the appearance of a 21st Century Lawrence of Arabia armed with a computer. T.E. Lawrence was an inner-circle accolyte of Cecil Rhodes’ secret society, working out of Oxford under the so-called Milner Kindergarten, as documented by historians Carroll Quigley and Arnold Toynbee. In popular culture, Lawrence became famous as a figure who single-handedly walked into the desert and created a united Arabia out of dispersed tribes, as portrayed in the 1962 Lawrence of Arabia epic by director David Lean. Today’s pattern of perpetual conflict and behind the scenes profiteering by corporations gives a clearer picture into the reality of Lawrence’s example, as well as that of Cohen.

A transcript from a scene in the David Lean film highlights the ‘double-edged’ position of Lawrence, and the “illusion” that plays into the covert British-led uprising for geopolitical gain. 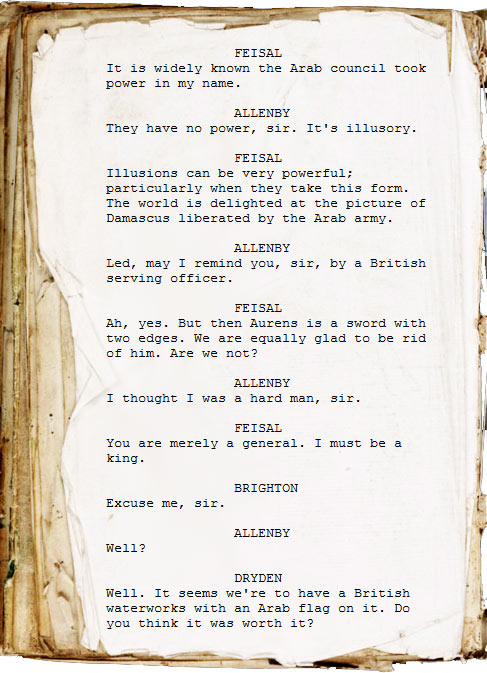 Scene in Lawrence of Arabia captures duplicity of the British Empire and the illusory nature of freedom.

Indeed, a successful narrative of “hope” and self-determination is the ultimate ingredient to pass the sniff test on a real stinker of a fraudulent bargain. The power play on the part of the British was so blatant that Lawrence could scarcely hold it back with a straight face. Buying into his own theatrics as a ‘savior’ and hero were perhaps his only escape as the system he served conned another dupe client state.

King Faisal was selected by Lawrence to unite the Arab tribes under a single banner as part of a tertiary front in World War I against the Ottoman Empire in the name of revolting for their freedom – under the ultimate banner of the Empire. The upset over negotiations after the war played a role in puncturing the momentum of the League of Nations’ inflated hopes for world government.

The conversion of a tribally organized region into a pliable state ultimately serving British interests is compared in an analogy form to the discovery of a “well” in the desert, trumped by the production of an entire “waterworks” (i.e. oil?). Such is also true of Jared Cohen’s efforts and motivations in the Arab Spring. There is more at work than first appears.

In the Lawrence film, Bentley, an American looking to draw the U.S into WWI on behalf of some influential figures discusses propagating Lawrence’s exploits to entice the American public into an ‘adventurous’ war. Before later mocking the sucker’s bargain for “freedom” by qupping “there’s one born every minute,” Bentley states:

“We Americans were once a colonial people and we naturally feel sympathetic to any people, anywhere, who are struggling for their freedom.”

The parallel to Cohen-style revolution is clear: the lure of independence is enticing bait to support a larger destabilization of an existing order. Lawrence’s dream of an independent Arabia was crushed, as any illusory notions from Cohen’s idealistic side, or from a hopeful public, will also prove vaporous.

The hand of Western power is effectively masked in the public mind behind the victorious image of a people-powered revolution bolstered by benign social media technology including Facebook and Twitter sweeping through a backward and repressive middle east region that is already constantly at war.

But in reality, the presence of phony color revolutions – essentially patented by George Soros in a modification of the British “Great Game” system, and sponsored the public-private partnership between the U.S. State Dept., NGOs and technology corporations – is plain to see for any who wish to follow the trail of connections and analyze the true events. Egypt’s soured revolution is emblematic of the double game and converted intentions of U.S. foreign policy and globalist design.