So many people cannot wake up. 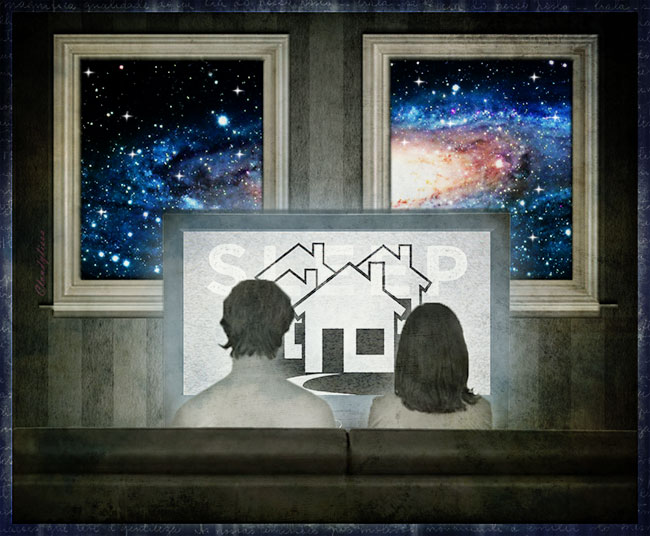 So many trapped in virtual prisons. Television and the Internet and mass marketing live people’s lives for them.

The media sells and tells people what and how to think about everything, and many people quietly do so, thinking as they are told without question. People stay inside and in their seat…disconnected, tuned out. The average American over the age of two watches 34 to 40 hours of TV a week; even on the low end, that’s over two months of every year spent in front of a glowing screen. It’s a sad testament that many homes have more television sets than people living in them.

When I disconnected my cable a few years back, I remember the customer service lady on the other end of the line incredulously asking me, “But what will you watch?”

Everything that exists is made up of energy and there’s an inherent interconnectedness to all living things, but keeping people at their lowest vibrational level keeps them from connecting to much of anything real. Type ‘television’ and ‘low vibrational energy’ into a search engine, and it’ll quickly return the fact that watching a lot of TV is like undressing your mind and submerging it into a bath of negative energy. Studies have shown watching TV actually changes your brain waves, effectively numbing the left side of your brain and rendering you helpless to your right brain which is incapable of decoding and critically analyzing information.

This puts us into a hypnotic state that author Wes Moore says, “produces highly functional, mobile ‘bio-survival robots.’” There’s a reason he dubbed television an “opiate of the masses“. It programs us. We tune in and stop asking questions.

The brainwashing has worked and people are addicted, but like any addiction, is the drug or drink or act really bringing the addicts true happiness in the end? What are they missing out on beyond being trapped before the flicker box? I guess that’s what I tried to show in creating the above image. There’s so much more out there beyond the false prime-time reality on display in everyone’s living rooms. The things we really need and the things on the screen are not the same thing.

It’s time to start asking the questions that television can’t (and won’t) answer. It’s time to wake up.

Comedian Bill Hicks once joked, “Watching television is like taking black spray paint to your third eye.” Or maybe he wasn’t joking at all.

I think it’s because of television in the first place that most people don’t even know what their third eye is.

Concept Art: Be a Drone Pilot!
Melissa Dykes May 09